But in this year 2019 Barcelona will have a new Christmas market: the one located in Port Vell.

The stops of the Fira de Santa Llúcia are organized in four main sectors: the mangers and figures, with everything necessary to prepare the manger and decorate the house; the green area, with natural or artificial Christmas trees, flowers, tions, etc.; the handicraft sector with all kinds of handicraft products and accessories to give as clothes or jewelry, and the musical sector with tambourines and other instruments, typical of the Christmas season.

For the inhabitants of Barcelona, ​​going for a walk along the Fira de Santa Llúcia is part of the typical traditions of this time of the year. A walk that is usually accompanied by a stop at a “granja”, a traditional cafeteria where you can have a “Swiss”, a cup of hot chocolate topped with whipped cream.

To go to the Fira de Santa Llúcia from our hotel, the fastest way is to take the metro L3. The stop is right in front of the hotel, then get off at Plaça Catalunya (there are only two stops). From there we will only have to walk about 5-8 minutes. 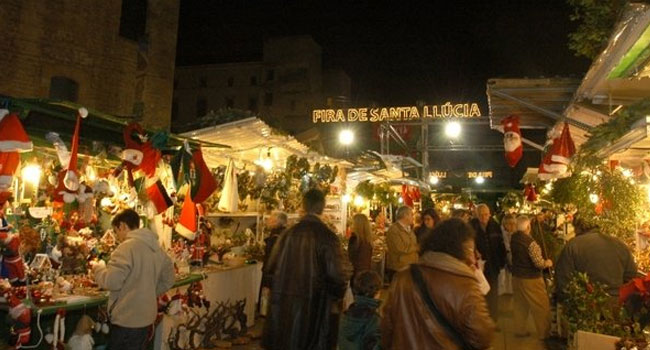 You can also go to the Fira de la Sagrada Familia. It is a little smaller but has the same variety of products and there are usually fewer people. There you will also find everything necessary to prepare our homes for the Christmas season and it has the spectacular Sagrada Familia in the background.

From our boutique hotel located in the center of Barcelona you can just walk to the Christmas market of the Sagrada Familia, it is a nice 15-minute walk, or you can also take the L5 subway, which is located just in front of the hotel and get off at Sagrada Familia stop. It is only two stops. 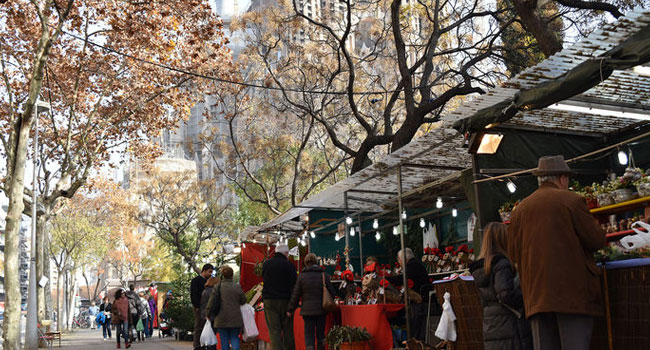 Both Christmas markets will be open until December 23rd. They also organize activities for the little ones.

You can find all the information on their web pages:

The installation of the Port Vell Christmas Market is part of the celebration of the 150th anniversary of the start of the Port de Barcelona project as a modern port. The Christmas market will be located in Portal de la Pau, in front of the statue of Columbus, occupying an area of ​​about 5,000m2.

Like any Christmas market worth its name, the Christmas market of Port Vell in Barcelona will also have a gastronomic area and a stage where musical performances and plays will be held. For the little ones, a classic style roundabout will also be installed.

But undoubtedly the most spectacular of the Christmas Market of Port Vell will be the 31-meter-tall Christmas tree, the largest that has ever been placed in Barcelona, ​​consisting of thousands of LEDs. The lighting of the fir will go together with that of the Portal de la Pau building and every night they will be illuminated with a light show to the rhythm of the music.

Without a doubt, the Barcelonans ​​are looking forward to this new Christmas market in Barcelona, ​​which will be installed until January 5th and contributes to the high Christmas spirit the city has these days.

Accessing the Christmas market of Port Vell from our hotel in the center of Barcelona is very easy and will take only 10 minutes. You can take the Diagonal metro L3, just in front of the hotel, and get off at Drassanes, a stop that is in front of the Columbus monument.