Christmas has already arrived in Barcelona! The Shopping Night Barcelona celebrated on November 22nd and the official lit of the Christmas lights in all the commercial areas of the city mark the starting point for the Christmas season in Barcelona.

The Christmas lights are the first sign that it is Christmas and it is time to walk around the city even if it’s colder than usual. The commercial areas of both the center of Barcelona and the different districts illuminate its streets so that walking is an even greater pleasure. Because walking through the streets of the city simply enjoying the lights and Christmas decorations is one of the first plans for the Christmas season in Barcelona.

And around the other most important cathedral in Barcelona, ​​and the best known, is the other great Christmas market, the Fira de la Sagrada Familia. It is not as big as the Fira de Santa Llúcia but it has everything you will need to mount the nativity and decorate the Christmas tree and the house, so it is also a highly recommended visit.

You can find more detailed information about the Christmas markets of Barcelona here.

The Nativity (called here “Pesebre”) is one of the most typical traditions, ​​which is why it is one of the important elements in the Christmas markets of Barcelona. But Barcelona also offers some nativities in XXL format, which can be visited during the month of December.

The Pesebre of the Plaça Sant Jaume, in front of the city hall, is always the most controversial and the one that is most talked about. Since a few years ago, it was decided to try to modernize this tradition by commissioning the project to a different artist every year. This year the artist who created the nativity of Plaça Sant Jaume is Sebastià Roca, who has asked himself what would happen if the protagonists of the Nativity gathered around the Christmas table as all families do, but personifying them in chairs. If you cannot imagine it, don’t worry, you can see it in Plaça Sant Jaume from November 23 to January 6.

But for the not so modern, do not panic! You can also visit the nativity organized by the Associació de Pessebristes de Barcelona, ​​which remains true to its traditional style and focuses on natural elements such as cork, moss or wood. This nativity can be visited at the Museu Frederic Marès from November 23 to January 2, and to get to it, you will first have to go through the museum’s courtyard, turned into a forest by a team of landscapers

We cannot forget this peculiar and exclusively Catalan tradition, which consists of humanizing a trunk by giving it eyes, a nose and a mouth, and a nice “barretina” (the traditional Catalan hat). It is a tradition of pagan origin, which was celebrated before Santa Claus appeared here. A log is collected and must be fed during the month of December. On the 25th a song is sung while being hit with a cane or wooden spoon and the tió “caga” (poops) presents and Christmas desserts. Many Catalan houses continue to celebrate the tradition of the Cagatió.
If you want to see a cagatió, you just have to walk through the Fira de Santa Llúcia or the Sagrada Familia Christmas Markets, but the City Council has also installed a giant Cagatió in the Plaza de la Catedral until December 19.

One of the typical pleasures of the Christmas season in Barcelona, ​​is to sit on a “granja” and have a good “Swiss” with churros. In other words, sit in a cafeteria and have a hot chocolate with lots of whip cream accompanied by delicious churros.

The most typical area to sit down for a good Swiss meal is on Petritxol Street, in the Gothic quartier. In this small pedestrian street there is a good concentration of “granges” where you can taste a nice chocolate, with a good mountain of whip cream. In this street you can choose between Granja La Pallaresa, Petritxol Xocoa and Granja Dulcinea.

In the area of ​​Gràcia, closer to our hotel, you can enjoy a good chocolate with churros at Granja la Nena (Carrer de Ramón y Cajal, 36) and at El Trebol churrería (Carrer de Còrsega, 341), which also opens 24 hours on the weekend. 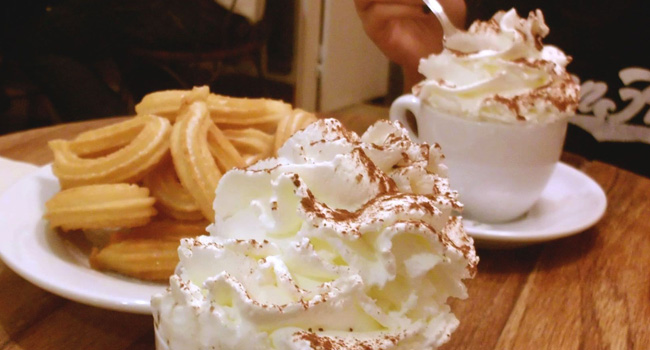 There are also a lot of activities organized by Barcelona’s city hall. The center of the activity will be in Plaça Catalunya, but there will be many activities of all kinds organized in the different neighborhoods of the city. You can find all the information on the official website.

Book your hotel for your Christmas mini-break here!